These Christmas Specialties Are Not to Be Missed in Indonesia

Christmas is quickly approaching. Do you wish to spend your vacation in Indonesia? If so, you're in luck, because there are several scrumptious Indonesian specialties available over the Christmas season. Interested in learning more about it? Here are five suggestions for traditional Christmas foods you can sample in Indonesia. 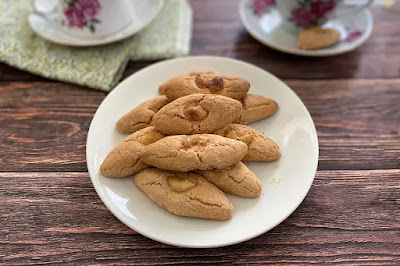 The primary courses are covered. Let's get to the dessert! Bagea is a cookie from the eastern region of Indonesia, including North Sulawesi, Maluku, Papua, and East Nusa Tenggara. This sweet is composed of sago flour, brown sugar, cinnamon, and nutmeg. The dough is wrapped in palm leaves before being roasted till crisp and ready to serve.

Typically, bagea is presented in little oval pieces. It has a very solid consistency but melts in the mouth when consumed. Sounds appetizing, right? Well, you can locate this dessert throughout the Christmas season in East Nusa Tenggara, particularly in Labuan Bajo. Come and enjoy a snack! 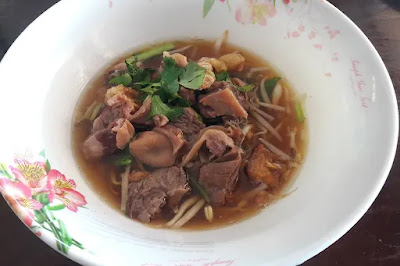 If the name sounds unusual, it is because brenebon soup is a local derivation of the Dutch term bruinebonensoep, which meaning kidney beans. The soup is prevalent in the eastern region of Indonesia and is connected with the cuisine of Manado, North Sulawesi.

The Manadonese typically create the soup with pig's trotters or hog flesh in its original form. As the meal gained popularity in Java, where the majority of the population is Muslim, fatty beef cuts such as brisket and ribs replaced pig in the soup base. Christmastime brenebon soup will undoubtedly warm your heart and stomach, so don't miss this recipe! 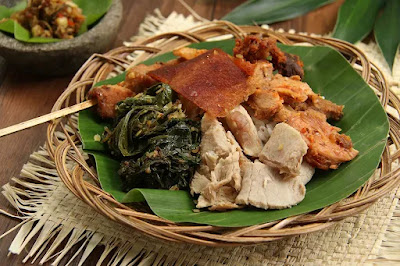 Known as babi guling in local dialects, suckling roasted pig is a popular traditional celebration dish in several regions of the world, including the Philippines, Puerto Rico, Cuba, and Indonesia, particularly in the Bali region.

In Balinese restaurants and food booths, suckling roasted pig is typically served with lawar (a blend of vegetables, coconut, and minced pork) and steamed rice. You can eat this dish whenever you want in Bali, but it has a much more festive flavor during the Christmas season. Come try it for yourself. 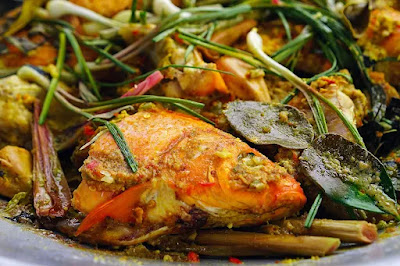 Want some hot seafood? Then this is the article for you. North Sumatra's Mandailing and Batak Toba people are the originators of arsik, a fish-based dish. Typically, the meal is prepared using carp that has been braised with various spices and herbs. This meal is distinguished by the use of andaliman pepper as the primary seasoning.

Due to the fact that andaliman pepper is only found above 1,500 meters in the Toba region, arsik has become the signature dish of the Mandailing and Batak Toba population. The fish is always served whole, representing the entirety of a person's life, and is typically smothered in a thick sauce.

Arsik is commonly served as the main course at big events and special occasions, including Christmas. If you're traveling to Lake Toba at the end of December, it shouldn't be difficult to find an arsik. 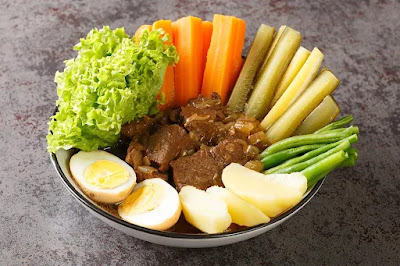 Although the name technically translates to "Solo Strait," the city is not located near a body of water. This may cause some confusion. The dish is also a long cry from what its name suggests: a beef stew with an abundance of vegetables. This is due to the fact that "selat" in selat solo does not truly mean "straight," but rather is a localization of "slache," the Dutch word for "steak."

This dish appears to be a blend of stew, steak, and salad at first impression. Some studies indicates that selat solo is healthier than ordinary steak since it contains numerous vegetables and natural spices. In addition, the fat and cholesterol content per serving is considerably lower in selat due to the meat's diminutive size. Christmas Selat Solo is readily available in Central Java, particularly in Surakarta City and Solo. Try try this one!

These Christmas specialities are what make the Indonesian holiday so festive. Do you intend to travel to Indonesia before the end of the year?